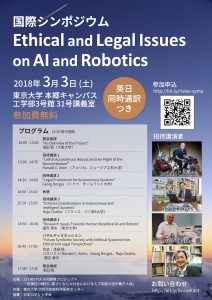 Lethal Autonomous Robots and the Plight of the Noncombatant

Ongoing meetings of the United Nations in Geneva regarding the Convention on Certain Conventional Weapons consider the many issues surrounding the use of lethal autonomous weapons systems from a variety of legal, ethical, operational, and technical perspectives. Over 80 nations are represented and engaged in the discussion. This talk reprises the issues the author broached regarding the role of lethal autonomous robotic systems and warfare, and how if they are developed appropriately they may have the ability to significantly reduce civilian casualties in the battlespace. This can lead to a moral imperative for their use, not unlike what Human Rights Watch has attributed regarding the use of precision-guided munitions in urban settings due to the enhanced likelihood of reduced noncombatant deaths. Nonetheless, if the usage of this technology is not properly addressed or is hastily deployed, it can lead to possible dystopian futures. This talk will encourage others to think of ways to approach the issues of restraining lethal autonomous systems from illegal or immoral actions in the context of both International Humanitarian and Human Rights Law, whether through technology or legislation.

Ronald C. Arkin is Regents' Professor and Director of the Mobile Robot Laboratory in the College of Computing at Georgia Tech and is the Director of the Mobile Robot Laboratory. He served as STINT visiting Professor at KTH in Stockholm, Sabbatical Chair at the Sony IDL in Tokyo, n the Robotics and AI Group at LAAS/CNRS in Toulouse, and is currently on sabbatical leave in Brisbane Australia at the Queensland University of technology and CSIRO. Dr. Arkin's research interests include behavior-based control and action-oriented perception for mobile robots and UAVs, deliberative/reactive architectures, robot survivability, multiagent robotics, biorobotics, human-robot interaction, machine deception, robot ethics, and learning in autonomous systems. His books include Behavior-Based Robotics, Robot Colonies, and Governing Lethal Behavior in Autonomous Robots. He has provided expert testimony to the United Nations, the International Committee of the Red Cross, the Pentagon and others on Autonomous Systems Technology. Prof. Arkin served on the Board of Governors of the IEEE Society on Social Implications of Technology, the IEEE Robotics and Automation Society (RAS) AdCom, and is a founding co-chair of IEEE RAS Technical Committee on Robot Ethics. He is a Distinguished Lecturer for the IEEE Society on Social Implications of Technology and a Fellow of the IEEE.

Autonomous Systems have become an integral part of our daily lives. Legal systems however are currently ill-equipped to deal with the fundamental legal challenges posed by such systems. I will deal with key issues such as the development of legal frameworks which can be applied to machines acting autonomously, questions regarding liability for the actions of autonomous systems and the creation of new legal institutions and classification systems for values and legal transactions. I will highlight the need for interdisciplinary, cross-border research to ensure that legal systems can meet the demands put upon them by technological developments.

Georg Borges is a Professor of Civil Law, Legal Informatics, German and International Business Law and Legal Theory and is the managing director of the Institute of  Legal Informatics at the Saarland University in Saarbrücken, Germany.
Georg Borges studied law at the University of Frankfurt/Main, the University of Geneva and the University of Bonn and also studied economics at the Fernuniversität Hagen. During his studies, he worked for a Tax Law Firm and achieved the status of  tax law assistant. After graduation, Georg Borges worked both as an attorney in an international law firm and as a researcher at the University of Cologne before he was promoted to the position of professor in 2004. From 2004 to 2014, he was Professor of Law at the Ruhr-University Bochum. In addition, he also sat as  a judge at the State Court of Appeals, Hamm Circuit.
As an expert on Business Law with a focus on IT Law, Prof. Borges has authored several studies and statements for German as well as European Institutions. His current research focuses onautonomous systems, the internet of things, cloud computing andGerman and European Data Protection Law.

Ethical, legal and societal issues (ELS) raised by the development of autonomous and intelligent systems have gained strong interest both in the general public and in the involved scientific communities, with the development of new technologies and applications. They cover a wide range of issues such as: future of employment, privacy and data protection, surveillance, interaction with vulnerable people, autonomous decision-making, moral responsibility and legal liability of robots, imitation of living beings and humans, human augmentation, or the status of robots in society.
The question in developing theses technologies, which might have an unprecedented impact on our society, is finally about how to make them aligned with the values on which are based human rights and well-being.
These issues will be overviewed, inspired by the ongoing reflection and work within the IEEE Global Initiative on Ethics of Autonomous and Intelligent Systems.

Raja Chatila, IEEE Fellow, is Professor at Sorbonne Université (Campus Pierre & Marie Curie) in Paris and Director of the Institute of Intelligent Systems and Robotics (ISIR), as well as of the SMART laboratory of excellence on human-machine interactions. He has served as President of the IEEE Robotics and Automation Society in 2014-2015. His research focus is on intelligent and autonomous robotics and he is author of over 150 publications in the domain. He is a member of the French Commission on the Ethics of Research on Digital Science and Technology (CERNA), and chair of the IEEE Global Initiative on Ethics of Autonomous and Intelligence Systems.

As AI and robot technology advance quickly, being applied to a wide range of human assistance and real world tasks, how to make and ensure them to be beneficial to human and society is now an urgent and important issue.
Besides the ongoing ELSI discussions and actions which are important, we should also look into the serious technical challenges evoked by the issue.
The issue consists of safety, reliability, explainability, value alignment etc. When they are cast on near-future AI/robot applications requiring certain amount of autonomy, they demand technical realization of some aspects of higher functionalities of human mind such as robust interaction dynamics, common sense, self awareness/monitoring, communicating about self, intention understanding, emotional system and consciousness, at a certain level.